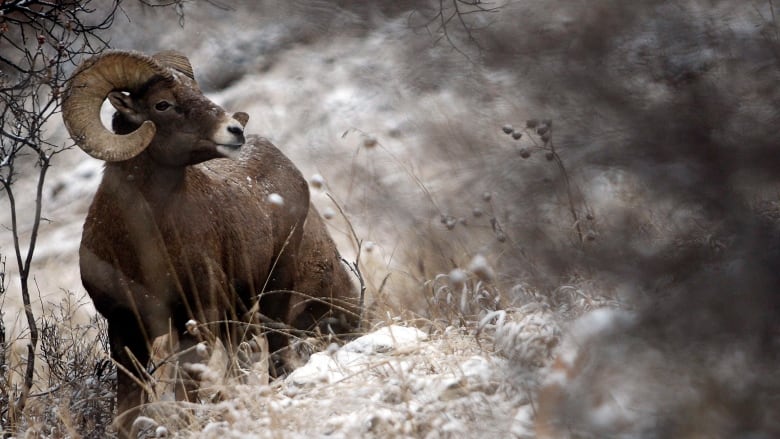 A Must Read: Historic Dun-Waters Farm & Short’s Creek Waterfall in Fintry BC

Bighorns of South Okanagan Near Kaleden, BC – Bighorn sheep get their name from the large, curved horns on the males, or rams; with female sheep sporting shorter, less curved horns. Bighorn Sheep keep their horns years round, unlike mammals with antlers, which are shed each year. Bighorn rams are armed with a pair of curled horns up to 45″ in length and weighing as much as 30 pounds. These horns are used to clash or battle against competing rams to achieve dominance.

Bighorn sheep are diurnal. They are very social creatures, sometimes forming herds of up to 100, although more common are small groups of 8 to 10. Mature males keep away from young and females in separate flocks for most of the year. Young females remain with their mother’s group, which is led by an older ewe which by scientific definition is any female bighorn sheep having a horn or horns of at least 5 inches in length, each as measured on the outside curve of the horn from the skull to the tip. That’s an easy one to spot!

Following is a short video slide of the shots we produced that day in the South Okanagan Desert Country Near Kaleden, BC

Unlike the many sites on the web that describe difficulties of finding a herd og bighorns and how to take photographs of them – certainly the Bighorns of South Okanagan Near Kaleden, BC are easily to find. They are tame and they tolerate the adventurous wildlife photographer in their vicinity. However, wild animals are unpredictable. Bighorn sheep normally don’t attack humans but in the rutting season in December, the males may attack if provoked or startled.

We use cookies on our website to give you the most relevant experience by remembering your preferences and repeat visits. By clicking “Accept”, you consent to the use of ALL the cookies.
Cookie settingsACCEPT
Manage consent

This website uses cookies to improve your experience while you navigate through the website. Out of these, the cookies that are categorized as necessary are stored on your browser as they are essential for the working of basic functionalities of the website. We also use third-party cookies that help us analyze and understand how you use this website. These cookies will be stored in your browser only with your consent. You also have the option to opt-out of these cookies. But opting out of some of these cookies may affect your browsing experience. Learn more about cookies, how to disable and clear them from your browser - in our Privacy Policy.

Necessary Always Enabled
Necessary cookies are absolutely essential for the website to function properly. These cookies ensure basic functionalities and security features of the website, anonymously.
Functional
Functional cookies help to perform certain functionalities like sharing the content of the website on social media platforms, collect feedbacks, and other third-party features.
Performance
Performance cookies are used to understand and analyze the key performance indexes of the website which helps in delivering a better user experience for the visitors.
Analytics
Analytical cookies are used to understand how visitors interact with the website. These cookies help provide information on metrics the number of visitors, bounce rate, traffic source, etc.
Advertisement
Advertisement cookies are used to provide visitors with relevant ads and marketing campaigns. These cookies track visitors across websites and collect information to provide customized ads.
Others
Other uncategorized cookies are those that are being analyzed and have not been classified into a category as yet.
SAVE & ACCEPT